On the Right Path: Improving Bike Safety & Infrastructure in Florence

On the Right Path: Improving Bike Safety & Infrastructure in Florence 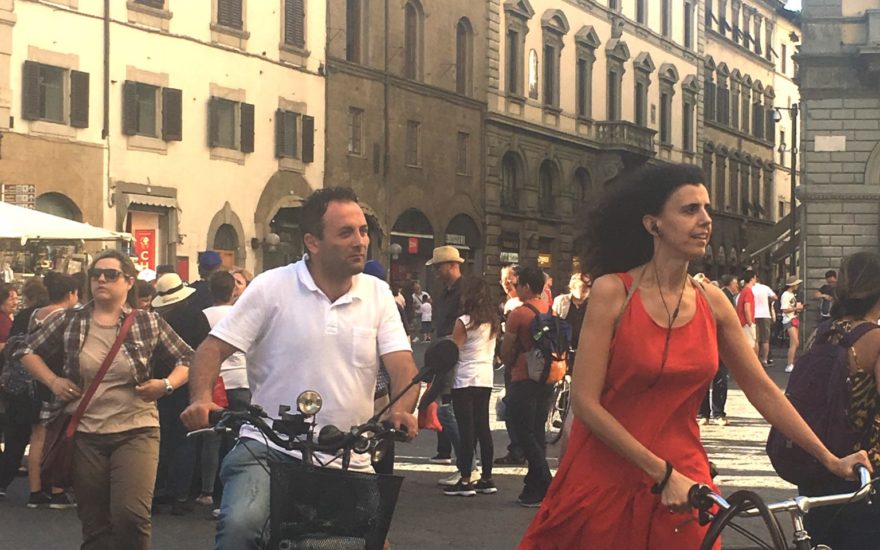 Since closing its city center to most traffic and launching Europe’s first free-flowing bike share, the Municipality of Florence has become one of the most walkable and bike-friendly cities in the European Union, achieving what Mayor Dario Nardella pledged while citing the 10,00 daily users of the new bike sharing program. Now, in partnership with GovEx, Florence has also become a model for other  cities to improve cycling safety through data analysis, cross-departmental collaboration, and community involvement.

First Of Its Kind Approach

“There is a place very near my house where the bike lane stops into nothing. It doesn’t naturally end in a sensible way, so car drivers do not know they don’t have the right of way.” Nearly every night as a local bike courier arrives at his Florence, Italy home, he is almost struck by a car.

To address the safety of Florence’s cyclists, GovEx and the Municipality partnered to analyze bike accidents and their correlation to the structure of bike lanes and street works. Because this required data and knowledge from multiple city departments and staff, a working group was formed with representatives from the departments of Statistics, Performance, Police, Mobility, and Information Communication Technology. This was the first time Florence convened such a cross-departmental working group.

A woman bikes along the Arno River in central Florence

The working group produced a report analyzing the accidents involving bicycles in Florence between 2011 and 2015 (Accident Analysis of Bicycle Network Florence Italy). The report integrated accident data with geospatial and transactional datasets, which describe the volume and flow of local bike trips and the shape of the local bike lane network. By plotting the accidents on a map, we were collectively able to identify “hotspots” where cyclists are more likely to be involved in accidents, and where future infrastructure development could be most impactful.

We also examined accident features such as the severity of injury, proximity to a bike path, if the incident was in a pedestrian crossing or a motor vehicle intersection. This data allowed the group to further explore the relationship of accidents to bike lanes, and validated anecdotal evidence that suggested bike lanes were a successful safety intervention.

The first of its kind collaborative analytical partnership between departments will serve as a model for future projects, allowing the Municipality to gain a deeper understanding of life in Florence, and where resources and attention are most needed. Additionally, with new measures of success and sources of data, Florence’s extensive open data program now encourages city analysts, public stakeholders, and students to closely examine raw, detailed, and georeferenced data. This level of quantitative engagement is rare among Italian cities, and has already enhanced the relationship between residents and their government.

Sharing the Results with Residents

Crucially, while the Municipality began to make operational decisions based on the report’s, we also convened a community meeting to share the findings with residents including representatives from cycling associations, rescue organizations, and the media.

The community meeting was an important moment to establish common ground for resident understanding of bike safety and how it could be improved. Putting data in front of citizens has shifted the conversation, it is more proactive and everyone is less defensive. The Municipality is starting from a mutual point of understanding.

Some of the report surprised the cycling community. “Seeing this data demystifies a lot of ‘fake news’ about cycling,” said a representative of FIAB Firenze Ciclabile. “For instance, people talk about accidents between pedestrians and bikers like it is the apocalypse, but now we know that is only the source of six percent of incidents.”

There was also an opportunity for meeting attendees to suggest ways the Municipality could improve street safety for everyone. Most attendees agreed that education and paint could mitigate many safety risks.

A member of FIAB Firenze Ciclabile said, “Frequently, people do not know what the bike lane crossing is and how it works. There is education missing as to who has right of way.” He went on to say there are many places where bike lanes are not clearly marked, creating confusion about who should be where. “It sometimes appears there is not a crossing where there was one. There should be investment in road signage and painting.”

Cyclists in the dense center of Florence

Having heard the concerns of residents and collected their suggestions for improvements, the Municipality offered next steps:

Overall, said the cycling advocates of Florence said the data analysis, report, and community meeting “has created a big move. We like that we are having these conversations and look forward to it continuing. We appreciate the help of GovEx and the Municipality. This has given us a lot to think about as the data is telling us the real story of what is happening in Florence.”

This effort is just a starting point for the city to integrate data and processes. For example, last September, Florence hosted European Mobility Week with a strong contribution from the associations and residents who participated in the this project. The City is already looking at apply the methods GovEx helped it improve to address other priorities of the Nardella Administration.

In The News
Impact

No comments to show.